This is my first piece working with E. Mallin Parry as performance duo The ELMS. Mallin and I have worked together – and been friends – for two decades. We figured it was time to find out what happened when we made some theatre together.

SL and Mal met at art school in 2001 and have been talking about the things they want to make together ever since. One or two actually got made. Most of them didn’t.

Mal and David met at a party in 2000 when someone tried to set them up. They danced for hours and talked about the things they wanted to make together. They have been dancing and talking ever since.

SL met David at a party at Mal’s house in 2002 when he levitated in the kitchen. They later worked at the same theatre and spent a lot of time talking about the things they wanted to make together. They have been going to parties and talking ever since.

SL and David and Mal all met at boarding school in the mid-90s which is a lie. They have been lying about how they met ever since.

Spontaneous, messy, improvisatory, happening right now in front of you for the very first time for one night only, and we’ve been getting it ready for twenty years.

Some pictures from early development work: 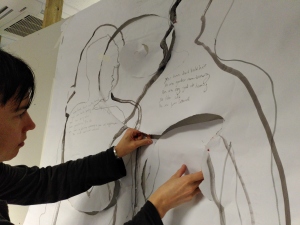 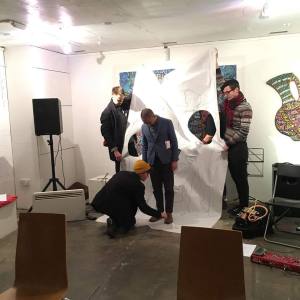